Learn more about our coaches 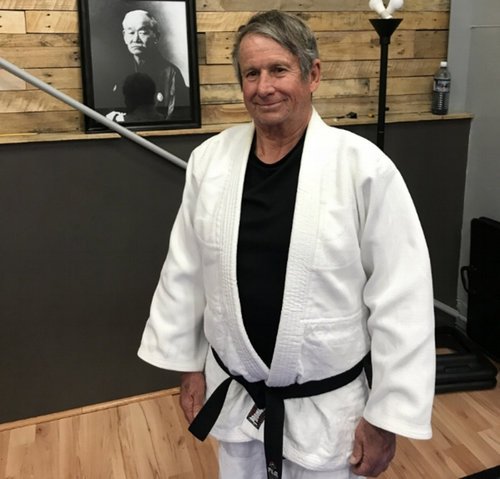 Sensei Goodwin has been practicing Judo in Boulder since 1962 and has been teaching in the area for over 20 years. He was presented the rank of sandan (3rd degree black belt) in 2011 through the Colorado Judo League. He has studied Nage No Kata, Katame No Kata, and Kime No Kata under Sensei Barry Hoffman (rokyudan, 6th degree black belt). Chris has a national level certification as a Judo coach through USA Judo.

Chris has enjoyed coaching many of his students at numerous local and national Judo tournaments, and he understands both the benefits and limitations of competition Judo. In Class, Sensei Goodwin focuses on the technical aspects of Judo and stresses the importance of Dr. Kano’s principles of Seiryoku Zenyo (maximum efficiency, minimum effort) and Jita Kyoei (mutual benefit and welfare).

Through his teaching, Sensei Goodwin hopes to honor his many fine sensei and perpetuate the practice of Judo as envisioned by Dr. Kano. 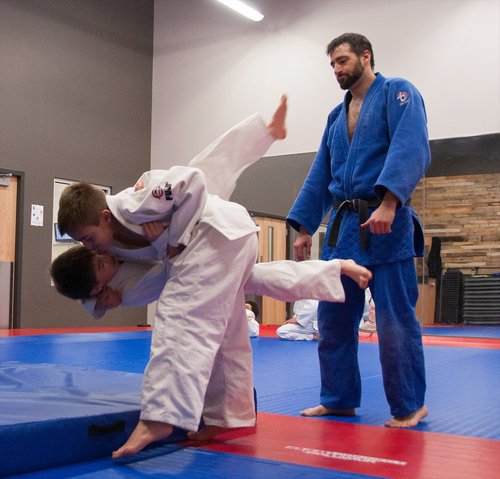 Sensei Ricky began studying traditional Karate and Japanese Jiu Jitsu at the age of 16 in Virginia. After 10 years, he reached the rank of Ni-Dan (2nd degree black belt) and had several years of Karate teaching experience.

In 2007, Ricky donned a white belt again and began studying Judo. He was immediately drawn to its intensity and physicality. Throughout his training in Judo, Ricky has competed in local tournaments and clinics, and has also taught Junior classes (ages 6-12) for five years.

In the winter of 2014, Ricky received his Shodan (1st degree black belt) from Sensei Chris Goodwin and Olympic Alternate Sherrie Wilson, and in 2016 he became a Certified USA Judo Coach. Teaching and education has always played an important role in Ricky’s life. He has taught high school English and coached multiple sports, including wrestling. 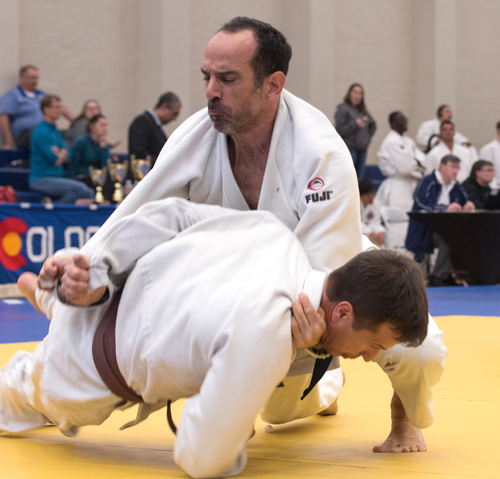 Manuel started Judo when in 1982, in Mexico City, and immediately fell in love with it.

During his first few years, he trained under two traditional Japanese Sensei, Osawa and Namba, who taught a classical Kodokan-driven style. This helped build his foundation in Judo and gave him an amazing starting point. After they both left the dojo for personal reasons, they were replaced by Sensei Charteris, a Mexican Judoka that had been training more in Olympic style Judo – more dynamic and competitive. With this change in Judo philosophy, he had the opportunity to develop his Judo strength and conditioning into a successful competition run throughout his late teens.

Later in life, Manuel moved to Houston, TX and continued his Judo study there. Then upon moving to Boulder, began training under Olympic Alternate Sherrie Wilson and former Junior National Champion Connor Murtha at the Boulder Judo Training Center before eventually joining Front Range Judo. In the Fall of 2018, Manuel became a certified USA Judo coach and then in the Spring of 2019, received his Shodan (1 st degree Black Belt) from the Colorado Judo League and USA Judo. He still competes locally and is one of FRJ’s main instructors.

When asked what he loves about Juo… Everything! He still enjoys every minute of training and competing and the opportunity to help with teaching the next generation. 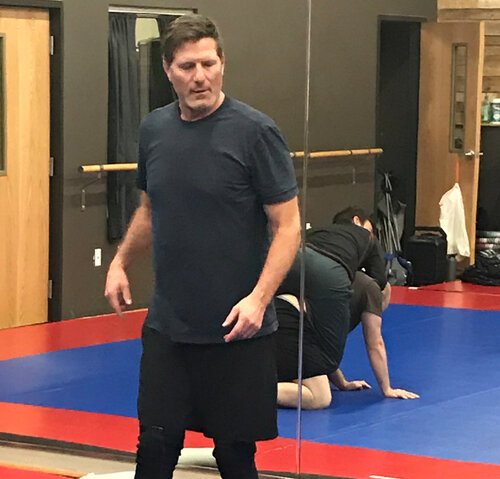 Shannon started wrestling in 8th grade at McQuaid Jesuit High School in Rochester NY and in 9th Grade started wrestling Freestyle and Greco-Roman for Lilac Wrestling Club. He would go on to wrestle varsity for 4 years at Bucknell University, a NCAA Division 1 program in Pennsylvania, wrestling against the top programs in the country. Throughout his amateur wrestling days, he won many regional tournaments in Freestyle and Greco-Roman from the Cadet to University levels. Twice he represented New York State at the Junior Nationals and represented the U.S. at tournaments in Sweden and Czechoslovakia.

After college he went to work full-time in New York City but occasionally dropped into the New York Athletic Club (NYAC) to wrestle with some of the best wrestlers in the area. He also helped coach at the high school level.

After moving to Boulder, Shannon started missing the competitiveness and physicality of wrestling and wanted the full-body workout that was lacking at the gym. He began studying Judo at the Boulder Judo Training Center in 2008 under such Sensei’s as Dr. Bernard Bush, Sherrie Wilson and Chris Goodwin. Judo was a natural transition for him as wrestling and judo complement each other not only in their physical similarities but also in body awareness and techniques.

Beyond training and instructing at Front Range Judo, Shannon also teaches the No-Gi Teen/Adult class every 2nd Wednesday of the month. The class is a great way to change things up; we put the gi’s away and freestyle wrestling techniques are combined with Judo principles for a fun and original workout. Shannon believes that wrestling and Judo are great all-around workouts that encompass not only physical strength but also athleticism and cardio. He is also a proponent of the mental side to both sports in not only pushing one-self to physical limits but also the strategy of figuring out how to score on your opponent. 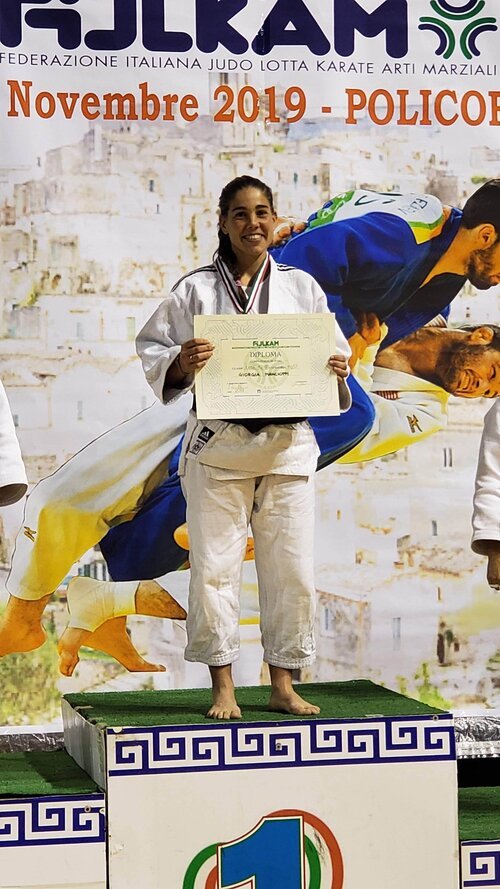 Sensei Giorgia started Judo in 1995 at the age of 5, in Genoa, Italy. She has been affiliated to the same club, Pro Recco – Judo, for more than 25 years, a club that she calls her second family. Giorgia considers herself a daughter of the art of Judo as her mom was the youngest black belt in Italian Judo history and her dad a very celebrated national coach. Because of her lineage, she always practiced Judo with the dream of going to the Olympics.

In 2013, Giorgia won her first national medal which earned her a place in the Italian National team. She received her black belt (shodan) at the age of 17, followed by 2nd dan (nidan) in 2008, and 3rd (sandan) in 2009. In 2010 she became a regional coach and started leading classes with Juniors. A few years later, she started coaching a group of teenagers, helping them win several medals at the National Championships. Sensei Giorgia continues to coach and to compete, her last National title is from November 2019, just before the pandemic shot everything down.

Sensei Giorgia is an ICU Nurse, she moved from Italy to the United States in 2016 and for the past two years has been a Boulder resident.

Since her move to Boulder, she has decided to turn her life into an “all in for sports” life. In February of 2020, Giorgia joined Front Range Judo, bringing her competitive mindset to our dojo. These days besides coaching FRJ judoka, she runs a fitness program called Giorgia fitMindset, which aims to encourage people to establish an active and long-lasting fitness routine.

“I am so happy that FRJ opened its doors to me. Judo has been a part of my life since I have memories and I can’t live without it. I love coaching and sharing my passion. I never thought I would be able to practice judo with another team in my life, but luckily, in FRJ I found a good passionate community.

With my experience of more than 25 years on the mat I would like to encourage kids to become athletes and see FRJ becoming a national competitive team. Moreover, my mission as a Sensei is to raise responsible and disciplined adults. Nevertheless, I would love to see more female members joining this amazing sport, who doesn’t require to lose femininity but even more to establish more confidence and strong self-esteem.

Judo for me is a parallel life. Each experience made on the mat anticipates real events in order to not only prepare athletes to compete but to get ready to deal with life. Judokas are statistically, great students, good persons, and have a higher chance to excel in future careers.

As a mom I would really recommend parents to encourage their kids to practice Judo.”

Ben started his Judo journey at Kin-Tora in Buffalo, NY, trained briefly in both judo and BJJ in Riverside and Redlands, CA, then relocated to Boulder, CO for work in 2009. In Colorado, he split time between the Boulder Judo Training Center and Dark Horse BJJ for several years. Ben was one of the first students at Dark Horse, training under Matt Jubera and Andrew Dudderar, eventually receiving the rank of Purple Belt in BJJ in 2014. Since then he has turned his focus back to Judo, training at Front Range Judo first at its Louisville/Superior location and now at its Boulder facility, where he is a brown belt (Ikkyu).

Ben teaches the Wednesday newaza class, focusing on technical precision and techniques adapted across disciplines (esp. judo and BJJ) that are most effective in the modern judo competitive format. He structures classes to emphasize spaced repetition for drills and targeted position training, trying to make sure students focus on the highest percentage positions and techniques.

Ben has a PhD from SUNY Buffalo and his day job is in scientific programming and data infrastructure, focusing most recently on translation research in immuno-oncology.